Question of anonymous gunner (10.24.2015): Hello! I wonder which is the boat that can have the most guns. There were several kinds of guns. (eg Davy Johns canons of triple) Thanks!!! Your site is excellent!

A: Boats with the most guns were warships called "The three-decker ships", around 1800. These ships could contain up to 120 guns. 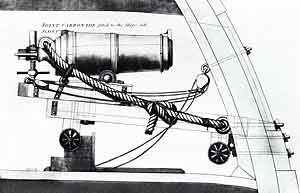 To answer the second question, there were no wacky guns several souls :)
However, there were some pretty innovative and extremely destructive guns such as the carronade created by the English in 1779 (they called it the destroyer and the French called it the devils canon).
It was a gun designed for close combat. This gun launched projectile 68 pounds (about 34 kilos) with a load of 5.5 pounds.

Who was the cruelest pirate? And who was the fairest?
Who was the captain of the Black Falcon?
I want to know what you know on currencies used by (end of 17th and early 18th century) pirates. What are their equivalences between themselves?
In your opinion who is the greatest pirate in history?
How was the construction of pirate boats made? My 8 year-old son must answer this question quite explicitly. Thank you very much.