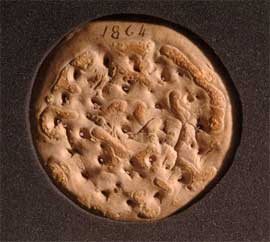 A: A sea biscuit, more commonly known as hardtack, was once the staple food of any sailor.

Sea voyages were long and food preservation posed serious problems. Even salted meat ended up rotting! The only remaining option was the hardtack, extremely hard and could sometimes be kept for several years. The sailors ate preferably in the dark so as not to see the mould and insects crawling over the food! 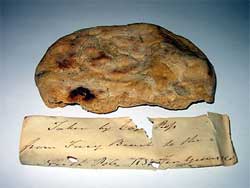 The sea biscuit was composed of an unleavened bread wheat flour compound having vitamin B and about 10% protein. It was very dense, baked, and annealed several times until humidity had become completely absent.

Hence the origin of the word biscuit from the old days of the sailors in the Middle Ages, called "bis-cuit" cooked twice.
© Photos from Vancouver Maritime Museum

On a boat which is the port and which is the starboard?
How to keep the sails on the masts?
Were the clippers armed? How many sailors minimum were needed to maneuver one, and how many to maneuver a frigate? Congratulations on this excellent site!
Where was La Buse executed?
I'm a writer and I would like to know whether there are very specific first names of pirates or there are some that would be better. And the last names? Thank you for your cooperation!