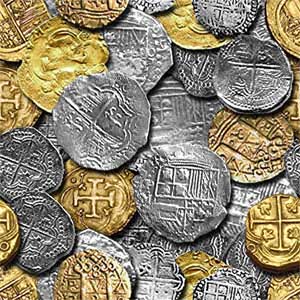 A: The eight coins (also known as the real de a ocho, Spanish dollar, and the eight-real coin) were minted by the Spaniards from the silver from the New World (the Americas).

They are often cut into pieces to serve as a small change because their value was calculated based on their weight in precious metal.

The piece of eight traveled a lot in the coffers of the Spanish ships for several hundred years, and became the current pirate booty.

Whats a sailor abandoned by its crew on a deserted island called?
For schoolwork I need to know the names of two blood brothers born in the early 16th century in the Ottoman Empire that spread terror in the Mediterranean.
What is the date of the first edition of Treasure Island by Robert Louis Stevenson?
Who was the cruelest pirate? And who was the fairest?
Hello! Can you tell me which style of ship is closest to the Black Pearl?