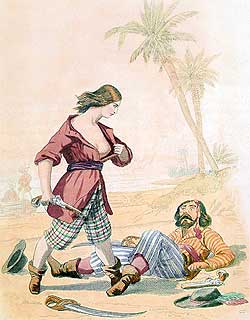 A: During the war of succession of Spain Mary Read was committed in the Hussars and became the aide of a Flemish officer called Read.

They married and opened the Inn of the Three Horseshoes together. Three years later her husband died and the hostel closed.

What are the nicknames of Robert Surcouf, king of the privateers?
Are there books concerning the youth of Olivier Levasseur La Buse in Calais or his life before becoming a pirate?
What is a pirates hat called?
How was the construction of pirate boats made? My 8 year-old son must answer this question quite explicitly. Thank you very much.
Did Captain Hector Barbossa from "Pirates of the Caribbean" really exist?